France on alert as wildfires rage in Europe’s scorching southwest 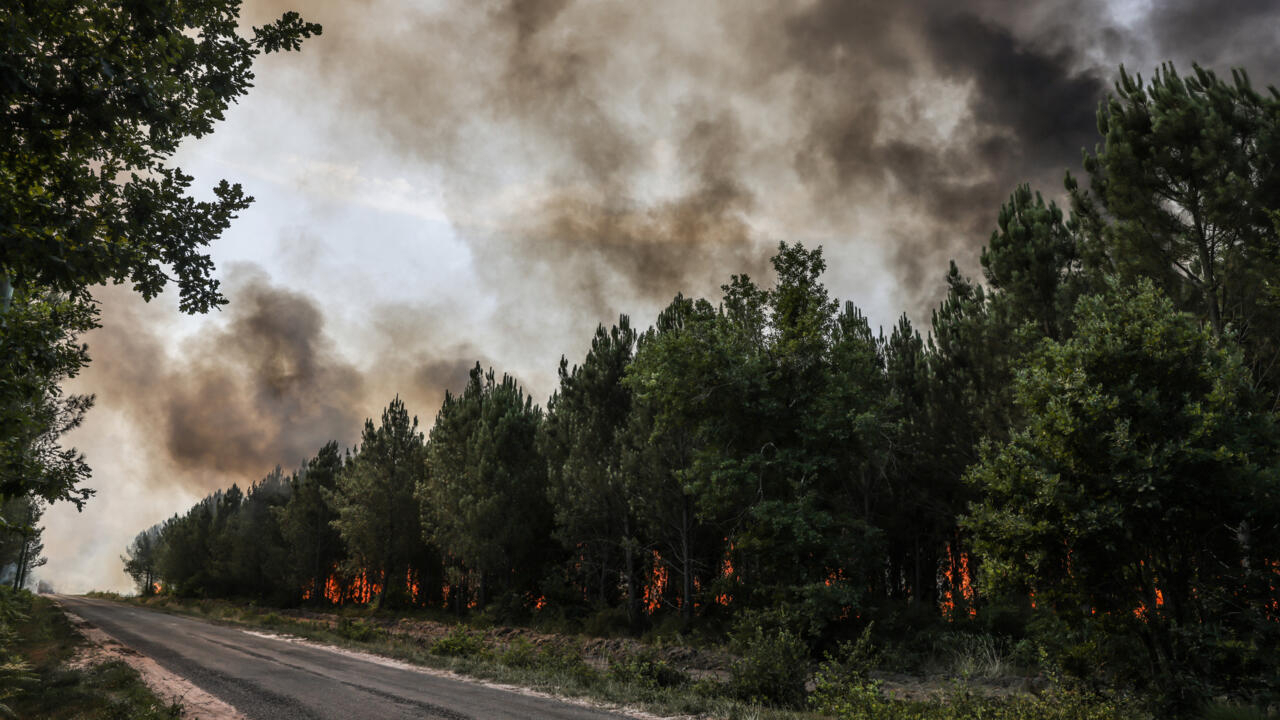 Paris (AFP)- France was on high alert on Monday as the peak of a punishing heatwave gripped the country, while raging wildfires in parts of southwestern Europe showed no signs of sign of slowing down.

Forecasters have placed 15 French departments on highest alert for extreme temperatures as neighboring Britain was set to set new heat records next week.

The heatwave is the second to engulf parts of southwestern Europe in weeks, and fires in France, Greece, Portugal and Spain have destroyed thousands of hectares of land and forced thousands of inhabitants and vacationers to flee.

Scientists blame climate change and predict more frequent and intense episodes of extreme weather such as heat waves and drought.

In France’s Landes forest in the southwestern region of Aquitaine, temperatures “will be above 42 degrees Celsius” (107 degrees Fahrenheit) on Monday, forecaster Olivier Proust said.

And Brittany, which until recently escaped the worst of the heat, could record temperatures as high as 40 degrees Celsius, (104 Fahrenheit), experts say, which would be a record for the region.

In south-west Gironde, firefighters over the weekend continued to battle to control wildfires that have devoured nearly 11,000 hectares (27,000 acres) since Tuesday.

Meanwhile, Spanish authorities have reported around 20 wildfires still out of control in different parts of the country, from the south to Galicia in the far northwest, where the fires have destroyed around 4,500 hectares of land.

The fires have already killed several civilians and rescue workers since last week, most recently a firefighter who died on Sunday evening while battling a blaze in northwestern Spain.

Forest fires in France have forced more than 16,000 people – residents and tourists alike – to decamp. Seven emergency shelters have been set up for the evacuees.

“In some areas of the south-west, it will be a heat apocalypse,” meteorologist François Gourand told AFP.

The chapel of a historic hospital in the south-east of the city of Lyon, the Grand Hôtel Dieu, offered refuge on Sunday to tourists including Jean-Marc, 51, visiting Alsace.

“We came back to admire the place, but we can’t leave, it’s too hot outside. We say a prayer in front of the fire! he joked.

French cyclist Mikael Cherel, taking part in the 15th stage of the Tour de France on Sunday between Rodez and Carcassonne in the south of France, described “very, very difficult conditions”.

“I’ve never experienced such a hot day on a bike. It really wasn’t a picnic.”

“Risk to life” in the UK

In Spain, firefighters managed to stabilize a forest fire that ravaged 2,000 hectares of woods and bushes in the southern region of Andalusia, regional chief Juan Manuel Moreno said.

The blaze started on Friday in the Mijas mountain range inland from the southern coastal city of Malaga and prompted the evacuation of around 3,000 people.

About 2,000 people had since returned to their homes and now that the fire has stabilized, Moreno said the remaining evacuees could follow suit.

Spanish Prime Minister Pedro Sanchez is due to visit the hard-hit eastern region of Extremadura on Monday where various fires have been raging for days.

In Portugal, nearly the entire country remained on high alert for wildfires despite a slight drop in temperatures, after hitting 47C – a record for the month of July – on Thursday.

Only one major fire was burning in the north on Sunday.

The fires killed two people, injured around 60 and destroyed between 12,000 and 15,000 hectares of land in Portugal.

In the UK, the Met Office issued a first-ever ‘red’ warning for extreme heat, warning there was a ‘risk to life’.

The mercury is expected to reach 38C in parts of the Netherlands on Tuesday.